Prouty, Psychology, and Free Will

Wisdom to empower the Underdog

N ow, Voyager chronicles the story of the underdog, Charlotte Vale, who makes good. Charlotte begins the story with a huge case of low self-esteem, instilled in her by her mother. Her quest, her voyage, aims toward achieving the state of self-acceptance, which we see at the end in her new-found zest for life, involvement in social activities and in helping her doctor plan the new children's wing of the Cascade sanitarium. Dr. Jaquith, at the end, sees this change in Charlotte and asks, "Are you the same woman who a few months ago hadn't any interest in the world?"

Charlotte overcomes her self-downing feelings with the help of her psychiatrist, Dr. Jaquith, who encourages her to get involved, to take part in life. 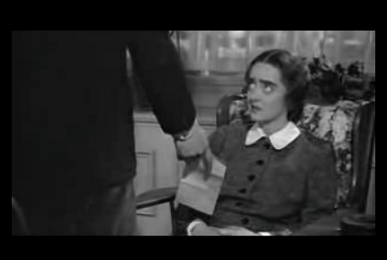 Dr. Jaquith was based largely on the real-life Austen Riggs. Take a socially active role; engage in challenging activities: Dr. Riggs prescribed this remedy. The Riggs institute still emphasizes it today. Jaquith pushes her to give a hearty Yes to the adventure,

The untold want, by life and land ne'er granted,
Now Voyager, sail thou forth, to seek and find.

but lets her know that it will require work on her part to retrain her ways of thinking.

In the beginning of the novel, Charlotte asks Dr. Jaquith if she is "introverted, doctor?"

Dr. Jaquith replies, "I wouldn't know. I leave all those terms to the fakers and the writers of books." It looks like Jaquith rejects the prevailing Freudian ideas. His guidance has more in common with Austen Riggs and our modern Dr. Albert Ellis, founder of Rational Emotive Theory. Dr. Ellis taught that low self-esteem can be solved not by high self-esteem but rather by self-acceptance. In his writings we find that the whole idea of ego is based on a flawed concept:

High self-esteem requires putting down someone else—exactly the snobbery that Prouty objected to in her novels. Ellis prefers the strategy of self-acceptance: unconditional, not dependent on feeling you are better than someone else. Charlotte Vale found that happiness comes from getting involved in life, as she did at the end of Now, Voyager, rather than in thinking she was superior to others.

The movie makes a point in the first scene. Prouty affords the patient dignity, combating the stigma that persists even to this day surrounding mental illness—a stigma that does not attach to, say, cancer.

She makes this point through the voice of Dr. Jaquith. For this scene Prouty added new dialog not found in the book:

Mrs. Vale to Charlotte, who has just entered the room: Dr. Jaquith has a sanitarium—in Vermont, I believe. Probably one of those places with a high wire fence and yowling inmates.

Dr. Jaquith: Well now, I wouldn't want anyone to have that mistaken notion. Cascade is just a place in the country. People come to it when they're tired. You go to the seashore. They come there.

Mrs. Vale: The very word psychiatry, Dr. Jaquith. Doesn't it fill you with shame? (she looks toward Charlotte) My daughter. A member of our family!

Dr. Jaquith, allowing a little pique to show in his voice: There's nothing shameful about my work, or frightening, or anything else. It's very simple, really, what I try to do. People walk along the road. They come to a fork in the road. They're confused. They don't know which way to turn. I just put up a sign-post. Not that way. This way.

A distinction should be made between the temporary, but still real, emotional difficulties that Charlotte (and Prouty in her own life) found herself in, which can be cured by someone like Dr. Jacquith, and the more permanent illnesses of the brain: schizophrenia, manic-depression, and clinical depression. Many people who are not aware of this distinction think the latter illnesses are not real; they lump them in with the emotional disturbances that can be helped with talk therapy. In reality the brain, as an organ of the body, is subject to illness just as much as a heart or a lung. Anyone who doubts this should go to Amazon.com and look for books under "neuroscience schizophrenia". There is 50 years of hard evidence appearing in peer-reviewed journals, and that has been confirmed and cumulatively built upon using the scientific method, finding the physical basis of these illnesses in the brain.

Sometimes the hardest thing to do when dealing with the sufferers of these illnesses is to treat them nicely even when they are lashing out—knowing that their acting out is caused by the mental illness. Often if you assure them that you are there for them, their episode won't last long. You have to keep reminding yourself not to blame the victim of the disease. It's harder to remember in the heat of the moment, especially since the illness causing the behavior is invisible from the outside, and our instinct is to react as if a healthy person was acting out.

The interplay and battles between Charlotte and her mother, who tries to dominate her, illustrate another bit of psychology. Charlotte learns to display grace under pressure. As Dr. Jaquith tells her to “Stick to your guns but don’t fire them,” Charlotte chooses the assertive option, not the combative, to counter the withering scorn from her mother.

In the end Charlotte stands up for her own freedom and autonomy.1 Now, Voyager reads much more convincingly as a story about self-discovery and awareness than as a conventional love story.2 The cure initiated by Dr. Jaquith corrects the stereotyped image of an all-knowing doctor who forces the female patient into the socialized mold of femininity. Throughout the novel, Dr. Jaquith's plan of treatment is defined by these principles: He believes in the conscious exercise of free will ("He said he'd gladly help her learn how to use her free will [it would require some study], but she'd got to do the using, and apply it to everything"). He urges his patients to trust in actions. And he views independence as a vital goal of treatment ("Dr. Jaquith would be proud of her this morning. Here she was alone, making her own decisions, her own mistakes too, perhaps, but afraid of nobody").3 Gradually, instructed by Dr. Jaquith, Charlotte not only "performs", but becomes the stage manager of her own life.4