In her battle to free herself from a domineering mother, Charlotte gets plenty of emotional support from sister-in-law Lisa and advice from her psychiatrist. But not until she meets Jerry does she really hit her stride.

Olive Higgins Prouty has given Charlotte Vale a massive problem to overcome—her overbearing mother. Charlotte has to learn to dispel the deeply ingrained insecurity and self-downing acquired over a lifetime of living with this mother. If Charlotte succeeds in this, she can look forward to a privileged life as a Vale of Boston. 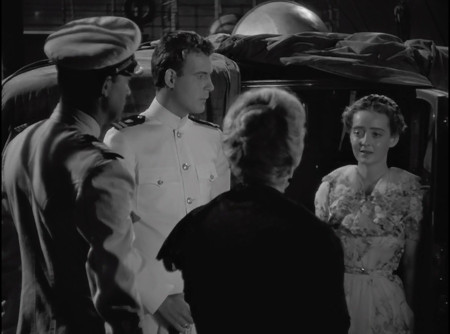 Early in the story Charlotte hides her passionate inner life—she disguises racy reading material behind stodgier tomes and hides an album that records the failed romance she experienced at age twenty.1

Charlotte: My moment didn't last long, as you can see. My mother didn't think that Leslie was suitable for a Vale of Boston. . .
What man is suitable, doctor? She's never found one.

As Charlotte matures, her mother continues to undercut her attempts at a social life and a romantic life. The film opens with an image of the Vale name on a house stone and then shifts to a miniature statue of a black jockey, placing the oppression of Charlotte in the context of a social world based on authority and unequal access to power. The Bostonians depicted here—Charlotte's mother and Eliot Livingston, to whom Charlotte is briefly engaged—view the world in hierarchical terms. Countering them are Jerry Durrance and Dr. Jaquith (and the spirit of Whitman), figures foreign to the Boston world.

Charlotte is emboldened by lines from Whitman's Leaves of Grass, which psychiatrist Dr. Jaquith hands her, saying ‘If old Walt didn't have you in mind when he wrote this, he had hundreds of others like you.’ He asks her to read for herself the lines:

Untold want, by life and land ne'er granted,
Now, voyager, sail thou forth, to seek and find.

In this couplet Whitman is speaking about the journey of the soul into the afterlife. Prouty turns it into a passage about seizing life and living it to the fullest. Whitman's poem opens new possibilities for Charlotte, encouraging her to express herself more freely. Charlotte finally finds escape from the domination of her mother through doors opened by a nervous breakdown. At the end of her stint at Dr. Jaquith's sanatorium, she sets out on a six week Mediterranean cruise. On the ship she meets and gets matey with Jerry Durrance, a married man, and she makes lasting friends with Deb and Mack, two old friends of Jerry's. At the end of an idyllic cruise, Charlotte insists and Jerry agrees that they will never see each other again. These lines from the movie quicken the scene:

Charlotte: I hate Goodbyes.
Jerry: They don't matter. It's what went before.
Charlotte: No — it's what can't come after.

“I'll look for you around every corner ”

When she returns home she displays a firmer sense of her own identity, fortified by her involvement with Jerry.2 In the scene where she finally stands up to her mother with self-assurance and composure, upon returning home from her cruise in the Mediterranean, Charlotte bravely exercises the assertive option taught by Dr. Jaquith: stick to your guns but don't fire them.

How does Jerry feel about Charlotte? When they have to part again, this time in Boston, he tells her “I'll look for you around every corner.”

Later Charlotte enjoys an affectionate bond with Jerry's daughter Tina. In a scene with Tina, Charlotte marvels: This is Jerry's child in my arms. This is Jerry's child clinging to me. Tina later kisses Charlotte's hand after causing a slight burn at a campfire. Even this level of tenderness prompts Tina to wonder over Charlotte's role: is she a friend, asks Tina? A mother figure?3 Charlotte's caring, affectionate, and nurturing role with Tina emotionally heals both of them.

Now, Voyager shows a woman reaching full selfhood outside of the nuclear family and outside of marriage. Dr. Jaquith challenges her assumptions about family and marriage.4 He lays out the ways in which a man is just not necessary in Charlotte's life.5 One critic described the film as blatantly challenging monogamy. In a gloriously defiant gesture the narrative does not bring Charlotte's desire to fruition.6 Charlotte parries her mother's dim assessment of her marital future, saying: I'll get a cat and a parrot and live alone in single blessedness.

Finally free of her stifling mother, Charlotte connects to her Boston social world and enjoys her life as a full-fledged Vale of Boston. Charlotte's embattled voyage to independence propels this novel, revealing psychological truths along the way. Prouty's keen observation, well-chosen detail, and fully realized character of Charlotte bring the story to life.

Addendum: My wife Debbie's analysis: The unrelieved creepiness of the Mrs. Vale character — some people really are like that. Her constant emphasis on hierarchy and her place in it: think of Franklin Roosevelt’s Mom, and her treatment of Eleanor Roosevelt.

A question about the realism of a main plot point: Would the cruise director have thrown Jerry, a married man, together with Charlotte, an unmarried woman? This could have happened the way Prouty set it up: Because there was only one carriage left on shore, the cruise director had to put Jerry and Charlotte in it together. And what a great setting in which to get to know someone!

See Having Fun with Now, Voyager for some thoughts about the movie.