Murray Vale suddenly needs to disappear and change his name. But no matter how deep into the woods he settles and what name he assumes, his signature qualities of quiet intelligence remain to reveal him.

Mrs. Prouty ventured to write her fourth Vale novel, Home Port, from the man's point of view. It centers on twenty-one-year-old Murray Vale. Murray has lived in the shadow of his Greek-God-like older brother, Windy.

Shy and thoughtful Murray, an amateur naturalist, collects and identifies local birds, insects, and plants. Earlier in his youth he shied away from people and took refuge in his tree-house. Naturally Murray would find his niche as the nature counselor at a boys' summer camp. And naturally they would give him the nickname 'Bug'. The story opens there with Murray and a junior counselor canoeing out on the lake. They meet a sudden enormous storm — the storm and the resulting accident test Murray's mettle.

Murray meets the storm bravely but is not able to save the other counselor's life. He feels sure the world will judge him harshly, and rather than face this, he considers whether to end his own life or drop out of sight. What kind of difficulties does he have to tackle in his effort to drop out of sight? Mrs. Prouty's treatment of this part of the story is riveting and unforgettable. He disappears, changes his identity, and starts a new life in the back woods of Maine—a world away from his privileged Boston family. 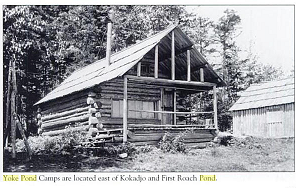 Besides escaping the circle of Boston Society, Murray has a second goal to tackle — he wants to straighten out his relationships with girls. Murray has an unassuming personality and his first girlfriend was looking for a more gregarious take-charge guy. This is explained early in the book, as Murray wakes beside the lake after his canoeing accident. At the end, to his enormous relief, he finds that not all girls demand this.

Nora Brock and her oafish dad, Sam, guests staying at the Maine hunting and fishing camp where Murray has found work, hire Murray to guide them on their fishing expeditions to lakes and streams around the camp. Using the name Elliot (Joe) Jones, Murray develops poise and self-confidence in his new setting. Nora and Murray are thrown together out in the woods. Responding sexually and romantically for the first time, Nora has found a thoughtful young man who does not overwhelm her. Murray, likewise, responds positively to a young woman who does not make demands on him with sexual assertiveness, but allows time for love to bloom on its own.

For Prouty's creation of Home Port, Paul Brooks served as her editor at Houghton Mifflin. The Houghton Library at Harvard holds many of the letters they exchanged. One letter sheds light on her search for a title for the book. Then this letter discusses bringing the other Vale's into Murray's story, integrating it with the other Vale novels. It describes reworking the plot at the climax of the novel to clarify Murray's motives.

A third letter ties up the final chapters, with Murray's exploits in the navy during WWII. The account of Murray's journey, proving his character, unfolds vividly. One of Prouty's letters to Paul describes the "idea that one doesn't have to be an athlete and physically strong in order to be physically heroic, nor a hale-fellow-well-met type to be liked, respected, and honored."

In her memoirs Mrs. Prouty speaks of writing this novel following on the heels of Warner Brothers production of Now, Voyager. She wrote Home Port with an eye to giving the scenes a cinematic, visual quality. Much of the book does have this cinematic quality. After Home Port was published, Olive Prouty started adapting it into a screen-play. The unfinished screen-play sits in the archives at Clark University, quietly waiting for a film-maker to bring it to life.