Historical Context of the Vale Novels
1920s through the 1940s

The 1930s world portrayed in the Vale novels

High Life on the Seas 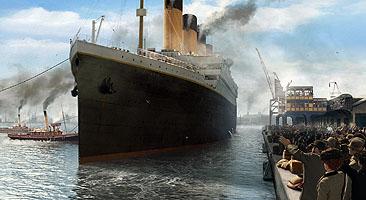 If you were a passenger on an ocean liner in the 1920s, your friends could contact you via radiogram. The message would be sent in Morse code by short-wave radio, received and written out by the ship’s radio officer, and delivered to you by a smartly-uniformed deck steward. It was exciting to receive a "radio" from your friends or your stockbroker—you felt well-connected and high-tech. The radio officer would also receive weather reports for the ship's ports of call. These would be posted on a bulletin board or printed in the ship’s daily paper along with news and weather from New York and a few other home cities. 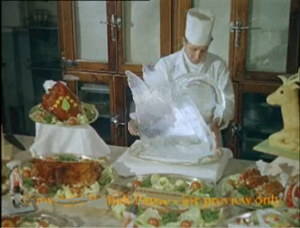 The ship's dining room had an air of elegance. "The ice swan is a relic of a past age of opulent display, when the great international hotels of the world had five-star restaurants, and the summit of luxury was still the transatlantic liner. In those days, any self-respecting hotel kitchen or ocean-liner galley had a sous-chef whose task it was to carve sculptures out of huge blocks of ice, often gleaming fantasies of vaguely nationalistic appeal. These sculptures, by definition ephemeral, usually four to five feet high, were carved in bulk and stored in the freezer, to be brought out to form the centerpiece in the first-class dining saloon at dinnertime. Caviar was usually presented in a life-size ice swan, its back hollowed out to hold about a kilo. On the big Cunard liners, smaller ice swans were also used for caviar at cocktail parties, either the purser's, to which all the more important and distinguished first-class passengers were invited on the first night at sea, or at ones given by the more social passengers in their own staterooms during the voyage. On my mother's side of the family I actually had a distant relative who was chief purser of the Queen Mary, and I remember him taking me down to see a big, brightly lit freezer compartment stacked with ice sculptures, like an Aladdin's cave of frozen treasures, in the center of which a heavily dressed and gloved member of the kitchen staff, his breath condensing in clouds of vapor as he chipped away with a mallet and chisel, was carving a swan out of a block of ice about five feet long and four feet across, to add to a whole row of swans, lined up neatly like a ballet chorus, on the floor."
From Another Life by Michael Korda, pg. 146. 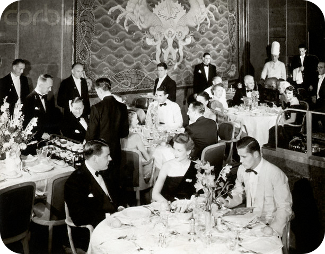 On shipboard, as Lisa and her daughters return from England in the beginning of Lisa Vale, Lisa takes issue with daughter Fabia's choice of outfit—a rough tweed jacket with patches on the elbows. Fabia loves the outdoorsy, informal feel of the jacket; Lisa feels it inappropriate to wear in the ship's dining room. That concern seems quaint today. 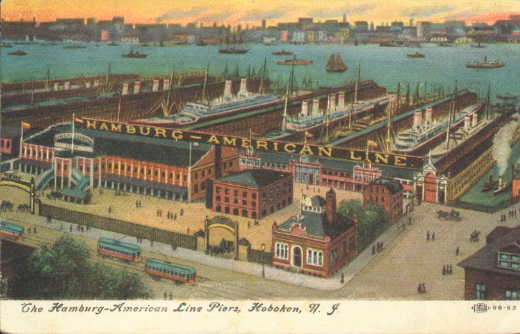 Up to the time of World War II, ocean liners used to dock at piers along the Hoboken waterfront. At these docks her husband met Lisa on her return from London. In the foreground of this picture from MaggieBlank.com, trolley cars carried the passengers and their luggage the few blocks between the piers and the Hudson Tubes. An earlier version of today's PATH trains, the Tubes would bring the passengers back to New York City. After 1927, people like the Vales could take a taxi back into NYC though the Holland Tunnel.

As discussed in Lies my Teacher Told Me by James Loewen, the 1920s saw a resurgence of racial bigotry, 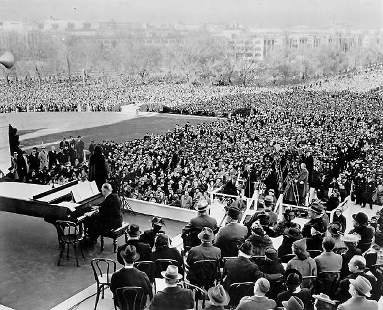 ushered in by Woodrow Wilson's presidency. A person of color never appears in the five Vale novels. Could it be that Prouty shared some of the unfortunate racial attitudes of her time? Or was she afraid that her target audience did? On that score, we know that Prouty joined the Daughters of the American Revolution. How did she feel about the Marion Anderson affair? The DAR denied the singer permission to perform before an integrated audience in Constitution Hall for Easter, 1939. In response, Eleanor Roosevelt resigned from the DAR and cleared the way for Anderson to perform at the Lincoln Memorial instead.

In the economic realm, 1929 marked a high-water mark of concentration of wealth. This inequity leveled out in the 1930s through the 1950s, thanks to

These enabled a growing middle class to share in the economy. But to be a Vale in 1929 meant you were enormously privileged. We have seen nothing like it until the 2000s, when the disparity of wealth and power has again reached an extreme level.

The depression of the 1930s disrupted the old order. In Lisa Vale the depression bankrupted and humbled the proud Rupert Vale, emblematic of many one-percenters. The depression brought forth the changes of the New Deal and raging battles between labor unions and big business. The Vale novels dealt with social liberation—Fabia, Charlotte, and Lisa Vale all waging their battles to free themselves from the stodgy values of upper class Boston. You could say this paralleled the social, political, and economic liberation taking place in the U.S. in the 1930s. 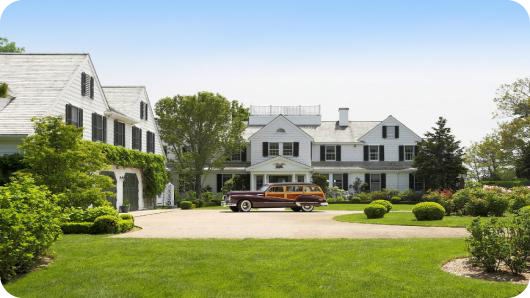 Since the U.S. population numbered only 122 million in 19301, environmental concerns did not press as urgently back then. If people like the Vales wanted to drive a twelve-cylinder limousine that got twelve miles to the gallon, why not? Live in a fifteen- or twenty-room house surrounded by acres of well-tended grass lawn? Who's to say no? Only today some of the rich are starting to see the impact these things are having on the Earth's dwindling wildlife.

Prouty freely depicts Lisa Vale's romance with a man outside of her marriage. In keeping with the time period of the early twentieth century, in polite society, no sex ever ensues. In Now, Voyager we find one scene where extra-marital sex may have occurred. After their hired car accidentally drives off a small cliff near Ravenna,

Charlotte is stranded up on the hill with Jerry Durrance overnight. Jerry a married man, Charlotte a single woman. It is left up to the reader's imagination what happened between those two in the wee hours of that rainy night. If anything did happen, Charlotte knew it would not be acceptable to talk about it in her social world.

Gender in the workplace

Due in part to social custom, able women faced exclusion from all but a handful of professions. For instance, woman could get work as nurses, teachers, secretaries, sales clerks in stores, and office staff at various companies. But only rarely as bank tellers, doctors, lawyers, and dozens of other professions where women can get jobs today. Dan Regan achieved a career success when he got appointed to the faculty of Harvard Medical School early in the Vale novels, taking place in the late 1920s or early 1930s. This era was neatly bracketed by the following timeline2 :

Married women generally were barred from office work. The marriage bar started out as a way for employers to save money—employers preferred to hire the cheaper younger workers. Over time it became a social norm—people frowned on the idea of a married woman working in the office.

Laws to protect women workers from discrimination and sexual harassment were years away.

Women writers were marginalized. Their work was rarely considered alongside male writers. Women who had the yen to write, but also were wives and mothers, had their writing pursuit discouraged or belittled as a hobby. Mrs. Prouty defied these attitudes and followed her writing bent on a professional basis. The artistic achievement of Now, Voyager paved the way for women writers.

These highlight a few aspects of the time period that form the backdrop to these stories. The position of the one percent is becoming as unattainable now as it was in 1929, making it a dream or a fantasy to the ninety-nine percent. These Vale novels did not happen so very long ago or so very far away. They tell a story of the one percent.