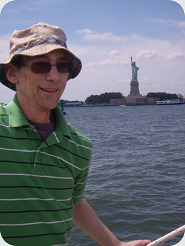 My wife and I lived in Greenwich Village back in the 1980s, and we used to haunt the old Theater 80 St. Marks. It was there we discovered Bette Davis. There my wife caught the 1942 Warner Brothers classic Now, Voyager. And while she sat in the darkened lower-East-Side cinema, this movie transported her into the world of 1930s Boston society. She loved Bette's acting. But I knew this movie didn't get its greatness just from this actress. So I took a look under the hood — I bought the book.

And found a treasure.

Houghton Mifflin owns the rights to the Vale novels. If they read this website they will rediscover their treasure and, I hope, publish them again.

Walt Whitman keeps cropping up when we explore the writings of Olive Higgins Prouty. She derived the titles of Now, Voyager and her next novel, Home Port, from Whitman's Leaves of Grass.

Discussed in the Prouty interview is Whitman's poem "A Boston Ballad". Its tone of irony setting it apart from his other work, this poem describes King George's bones being paraded through the streets of Boston.

The article on Olive Prouty, Religion, and Walt Whitman highlights the poet's little-known poem "The Sobbing of the Bells". And check out the New York City flavor of Whitman's poem Crossing Brooklyn Ferry.

The more recent poet Robert Lowell (1917 — 1977), brilliant member of the old Boston family, refers to life on Marlborough Street in the 1950s in the first part of his poem Memories of West Street and Lepke. It turns out that the word for a woody station-wagon was beach wagon. In his next poem, "Man and Wife",

At last the trees are green on Marlborough Street,
blossoms on our magnolia ignite
the morning with their murderous five days' white.

The articles on this site spring from an attentive reading of the Vale novels. Some points in the Now, Voyager article come from Judith Mayne's afterward in the Femmes Fatales paperback edition and from Kenneth Price's book To Walt Whitman, America.

About half of the material in the Olive Prouty Interview comes from Prouty's article "Character Delineation", which appeared in the January 1943 issue of "The Writer".

The Letters to the Editor, sent between Prouty and Ferris Greenslet, her editor at Houghton Mifflin, were found in the Houghton Library at Harvard.

In the special collections at Clark University, Worcester, Mass, the Prouty papers were only made available to the public in the year 2000. I received expert assistance from archivist Fordyce Williams, who guided me through the collection. I discovered an old treasure in the archives—the typewritten manuscript of Lisa Vale. The author had handwritten revisions on almost every page, following input from her editor. The Vale novels benefitted from these kinds of revisions:

Community. If enough fans of Olive Prouty's books are interested, we can arrange to get together. Make a tour of sites in Boston that relate to these novels, or charter a sailboat around the harbor. Brunch at a restaurant.

Reprinting the novels. No word yet from Houghton Mifflin, whom I have contacted in this regard.

Produce a film version of the Vale novels. The Now, Voyager film strikes a chord. Like a symphony, a movie combines the ideas of the writer with the art of the performers. Bette Davis brought her own glowing magic to this movie, as did Olive Prouty. Can a filmmaker today possibly capture that kind of magic and make a movie of Lisa Vale? of Home Port? I might have to adapt them to a screen-play myself. There are arts cinema, revival houses, and restored movie palaces dotting the country that might show such a movie.